This is the fourth article in a series about the story and technical details of Goblin Quest: Escape!. If you’d like to support us on Steam Greenlight, you can find our page here: http://botbiteindustries.com/greenlight.php

This post is about game and level design, its progression and the conclusions that led us to the final version.

The focus of the game is exploring the dungeons, surviving only through means of cleverness and haste, getting all the gold possible and picking up the Gem, a precious treasure, hidden on every level. The gold coins are always available and farmable, but Gems can be acquired just once per every level. With gold the player can buy consumable items, which makes surviving easier, and Gems provide permanent upgrades on Mook in the form of clothing and their upgrades.

As for the dungeon, besides towers there are the traps (which are kind of mechanical monsters, contraptions with the goal to hurt us). The towers are the static threat, easily avoided, and the traps provide the thrill of being chased, but with a little wit they can be outrunned, or outsmarted.

We created a very versatile set of abilities for the towers and the traps, as those were needed to be tailored for each level to provide balanced but always changing level of challenge.

For example here is a tower that shoots fire projectiles. From the type of shot, through the velocity, and reload time, there are several settings and all were tailored to make a one-of-a-kind tower for that specific area of the map. This one effectively blocks a corridor, with the Gem at the end of it. 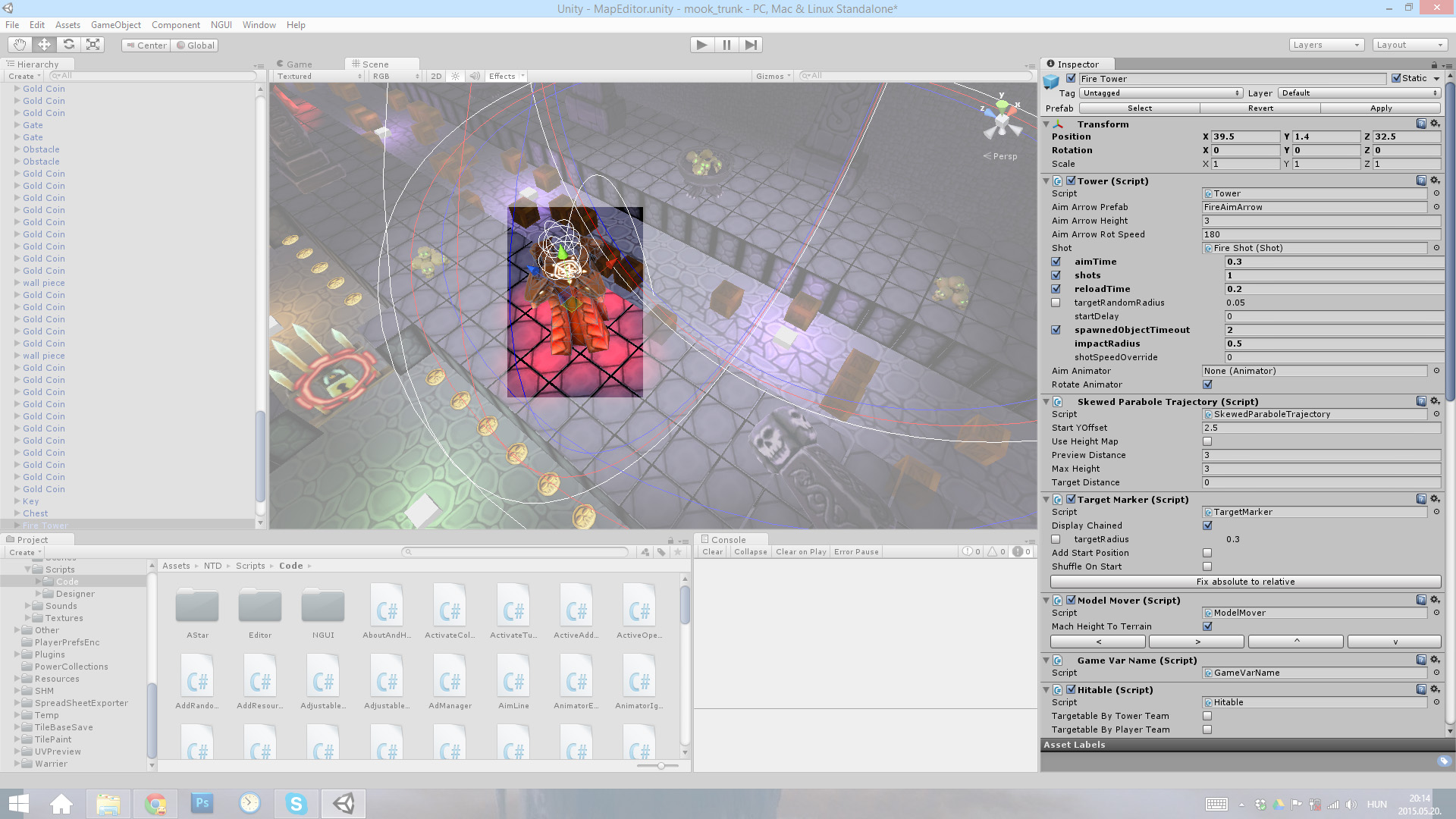 We created towers that can shoot traps or gas, so there are a lot of settings for the lifetime of the projectile (as the traps or gas clouds remaining on the level would freeze the game even on a high-end pc eventually :) ) 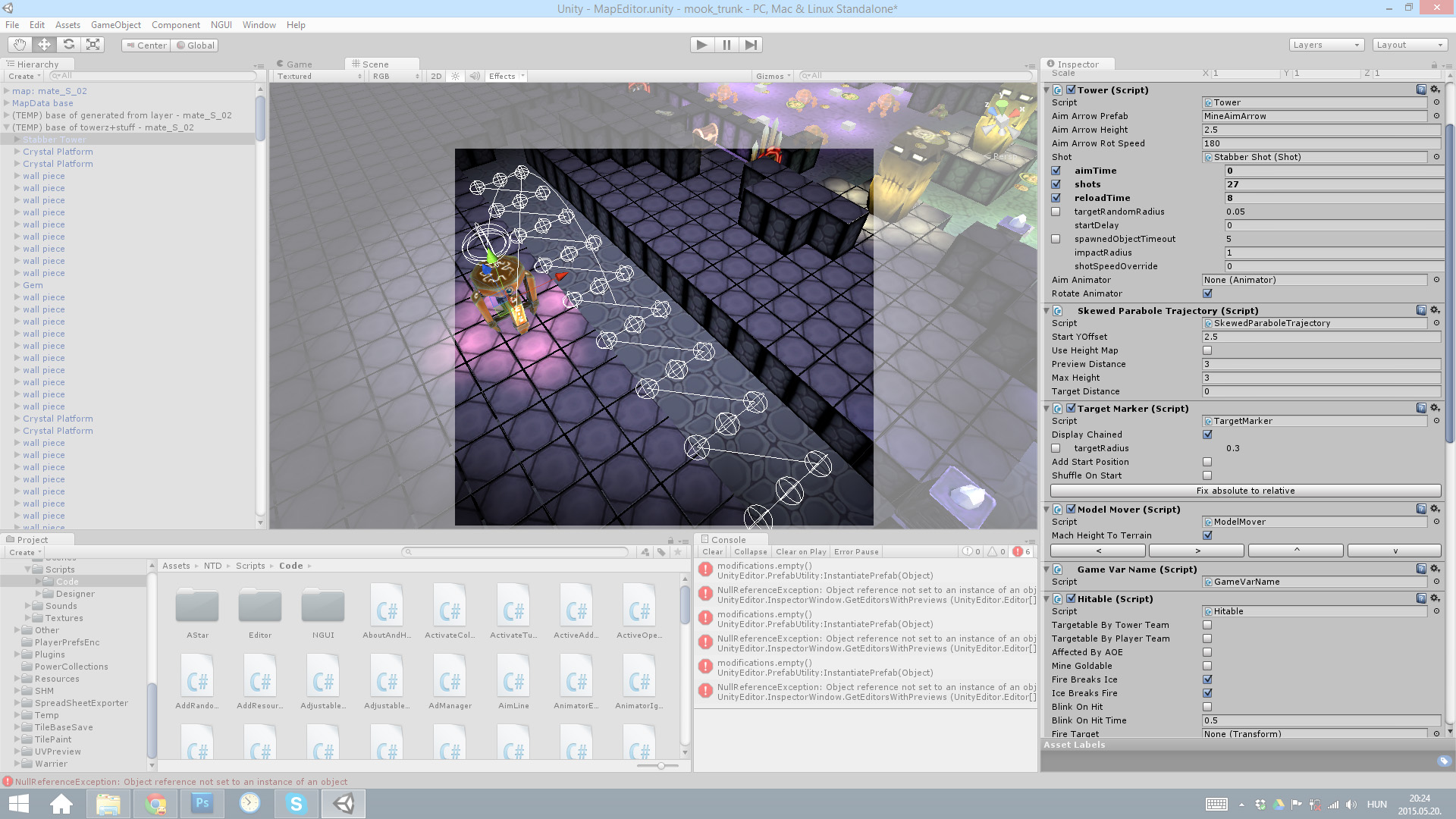 Traps are similar, with many options for the setup, but the big difference is that the basics like speed, damage, attack time, etc. are the same for all instances of the trap. The movement patterns and behaviors are individual, as the particular level demands it. They could just guard a spot, patrol on a specified route, or even hide underground, waiting for the prey :)

Here is an example of a patrol pattern for a group of Slicer traps, basically guarding the gold on the middle, combined with an Ice tower (in the game ice just slows us down) to make it a harder loot for the players. 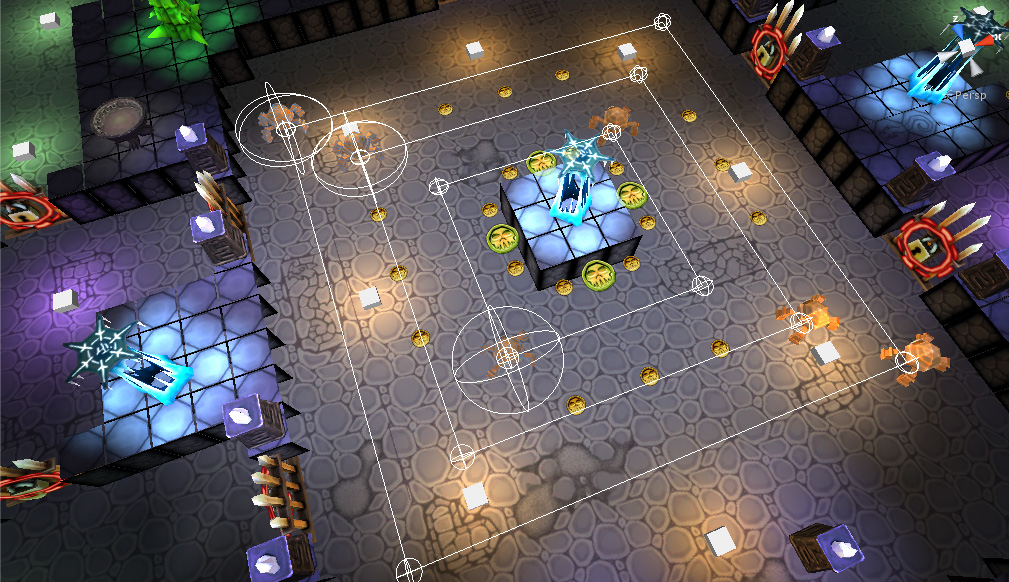 With these options we were able to create any kind of dungeon and by gradually mixing towers and traps we could provide a non-repetitive, evergrowing challenge throughout the whole game.

Also, we had to keep in mind that the players want to feel rewarded, so the best loot areas are usually designed around some threat, but at the end of each level there is always a large amount of gold.

Loot is also used for the drive to explore the dungeon, or to guide the player to some not-so-obvious place. 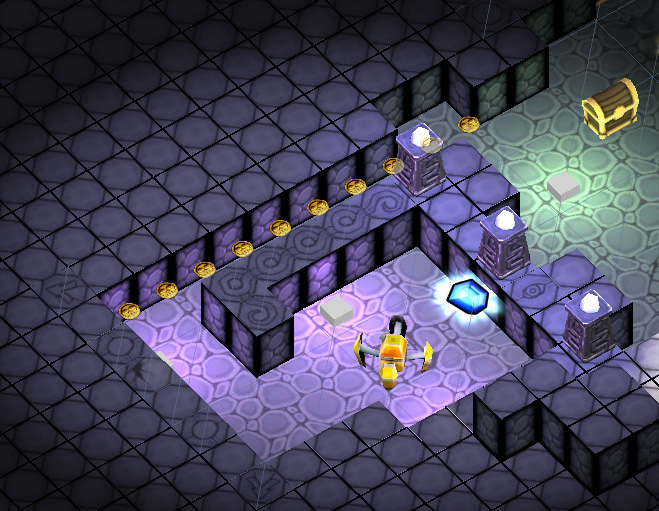 But to make the players really go trough a level the way we want, our best tool was the Gate. This was simple, a gate either just opens on approach, or needs a key to be unlocked. And the amount of keys collected specifies that the gate opens or not. So, we could make levels with 6 keys needed to open the last gate, forcing the player to explore the dungeon. Also, there are levels where the Gem is guarded by a single gate, but getting the amount of keys requires thorough searching of the level.

A heavily guarded 4th key, behind a gate which requires 3 keys 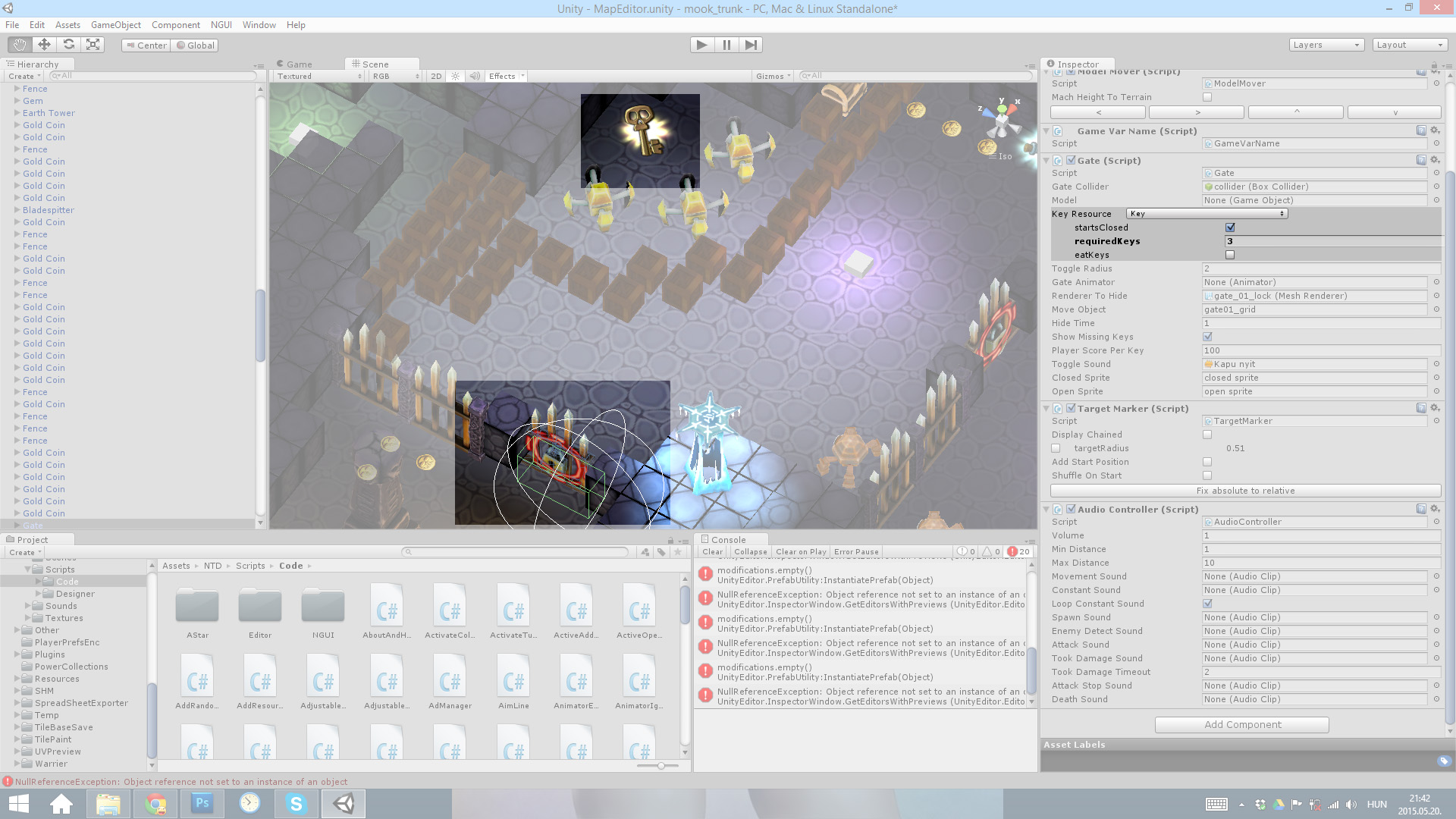 To be sure there’s a bit of guidance on the maps (and to make them more appealing) we used of a few colored light sources. This way rooms become more distinguishable from each other, and look nice in the game too :)

Of course all of this was not done in an instant, and was not obvious at the beginning, but this is what we ended up with.

Thank you for reading, and don’t forget to vote us on greenlight :) The link is: http://botbiteindustries.com/greenlight.php
The next article’s topic is a secret :)